We Found a Hat

Two turtles. One cowboy hat. Who will wear the hat? We Found A Hat is a picture book told in three parts in the desert, in the style of a silent Western Film that introduces the upcoming scenes. Klassen is the master of sly humor. How can one turtle's eyes convey so much expression? Nevertheless, without them saying much, the readers can imagine what the turtles might be thinking. 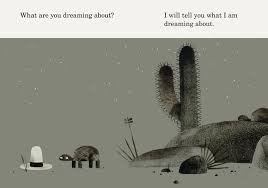 As the sun sets in the desert in We Found A Hat, the turtles both try on the hat and try to forget that there is only one hat, and two of them. When one turtle says to the other, “What are you thinking about,” the other turtle replies, “Nothing.” His eyes slide to the left in slow-motion, where he is clearly eyeing the hat on the opposite page.

With pared down text, this conversation between two turtles is the perfect bedtime story to read aloud. Which turtle will wear the hat in the end? Read this book and find out!